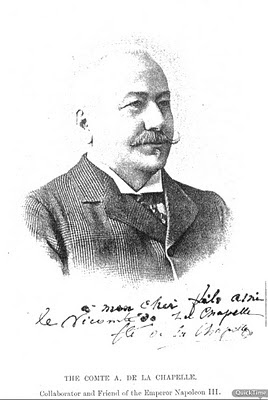 Two portraits (1) From Comedy and Tragedy in the Second Empire and (2) from a recent Ebay auction which I had lost. The CDV was by Nadar and just labelled "de La Chapelle" so I am assuming it is the man though it may not be.
My purview in 19th century research is limited to those creatures of the stage who visited Australia or those connected with them and so one might easily wonder how the heck did I get from fiddlers, warblers and piano-bangers to French Aristocracy. Well, it's not hard as it turns out. Scratch a little the thin laminate surface of most visiting luminaries and one finds the lacquer hiding nobility there somewhere. Edouard Boulanger the pianist had parentage connected to Marshall Lannès, his father secretary to an-ex secretary of Talleyrand, Marquis Chisholm the keyboard virtuoso was tuner to the Duke of Argyll in his youth, Horace Poussard was a favourite of Eugenie. Australia was a field of adventure, a kind of back-up Wild West in which a fortune maybe made; where any connections of noblesse still had the gilding freshly sized on to the carved wood of French oak.
Jean Joseph Xavier Alfred de La Chapelle and Morton is remembered as a French writer and Historian connected with the French court (Napoleon III and his wife Eugenie who looks like a young thin Walter Matthau in drag, but let's not go there). His father was an Officer under Louis XVIII and had roots going back as impressively as rootage does to the Périgord, one of the many cocotte-minutes of French history.
But history is rather silent on what he did between 1860 and 1869 when he flew back to France at a clip. What did he do in Australia? Well, he got married to the daughter of Col. Creed Royal, an ex-Army officer who played flute in the theatres her and formed, and toured with, his family act with his other daughter, who I think, sang. Kate nabbed Alfred married him at some point though none have found a record of the marriage and sadly she died on April the 8th in 1878 in Paris. They had the following children;
1. Victor Octave Alfred Xavier, Vicomte de La Chapelle (illegitimate according to the counts sworn statement at the French Consulate!)
2. Viscount Paul Xavier de Morton de La Chapelle K.L.H. Burma, later Officer in the French Army, married Blanche Leygonie. He was born in Brighton, Australia on 20 July 1865
3. Viscount Xavier Royal Alfred de Morton de La Chapelle, Captain 5th Rifle Brigade and married Dorothy Clark.
The Count married a second time, rather late in life if I read a right my reference material in 1891 to Eugenie Renault de Ballières and had another son:
4. Viscount Jean Joseph Xavier Alfred de Morton de La Chapelle, born at Mentone, Rocque, Brunne, France 2nd of August 1892. 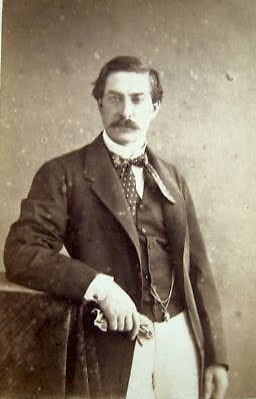 But back to what he did here. Why? Gold of course. He had been in America for the gold-rush and ventured into every kind of thing one could imagine, never ever making his fortune but gaining experience something akin to the gilded halls of Versailles, only it was the gilding of his psyche that was taking place. He gambled, he speculated, he invested, he touted, he was arrested, condemned to death, released and witnessed life's greatest should-be-fictions in the circles he frequented. Then he came to Australia and did much the same thing, adventurising until he was exhausted, encountering bushrangers, climbed the Snowy Mountains. Having enough and probably feeling the weight of duty upon his soul headed home and soon after back to France to cover the Franco-Prussian War for one of the English newspapers. [Most of this comes from Dr. Clancy Patricia who wrote a smashing tapestry piece on him. I have a copy.]
But his interest for me is in his management of the visiting French Violinist Horace Poussard (whose grandfather had been employed at Versailles in the service of one of the Kings daughters...there's the royals again) and cellist [Louis] Rene [Paul] Douay. I have only etchings of them from our State Library, but to have pictures of all is a treat, especially of the Count de La Everything. There is a photo extant of the Vicount's first son, which I had received from a descendant but he asked me not to post it so I can't.
Posted by Allister Hardiman at 8:57 PM